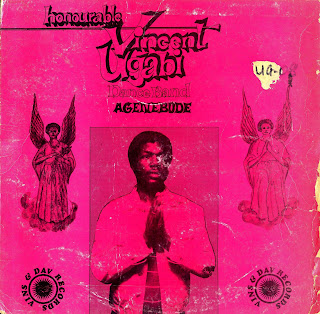 Agenebode is the town where Mr. Ugabi is based.  I was told this record was released to celebrate his recent conversion at the time to a brand of Christianity that believed among other things that you could pray to God the same ways the angel in heaven could.  It is one of my favorite African record covers and songs.

The Honorable Vincent Ugabi was one of the great Etsakor singers in Nigeria in the 1970's. He did several LP's on major record labels like Decca, EMI, Akpola, and many other smaller indigenous labels, including the legendary Ijebor and Kabakar labels.

I had a chance to correspond with Mr. Ugabi recently and this is what he told me about his career

My name is High Chief Hon Vincent Ugabi, the ambassador of Etsako Musicians (born 20 September 1940), from Edo state who is based in Agenebode. I am a Nigerian high life singer, songwriter and multi-instrumentalist.  I am known professionally as Honorable Vincent Ugabi.

I am regarded as one of the first African traditional High life musicians to gain international success and have been called one of the most influential Etaskor musicians of all time.   My music represents spirituality, life and soul and is inspired by the lives, parables, stories and historical details of my culture.  My kind of music is the kind that bring life to the dead and hope to the hopeless

I have more than 30 LP's to my credit.  All of these records helped to define what became known as the Etsako/Weppa Wanno sound.   The Etaskor sound was one of the most creative and meditative forms of highlife music in Nigeria during this time. Many of the most of important releases appeared on the legendary Ijebor records label in the mid 70's and early 80's.

I did not start out as a musician.  I was a photographer, tailor and hair stylist before I  settled down with music in my early 30s.  I realized music was my true calling after my father died in 1971.  I was based in Lagos when I finally decided to focus on music.  I recorded my first two LP's in 1971 and 1975 respectively.

My community was impressed by my recordings and live performances. I got a lot of positive responses and support from them and they invited me to relocate back home which is in the Weppa Wanno region of Nigeria in 1977, where I launched a very successful career.  I performed under my own name and was also the lead singer for the Weppa Wanno Sound band.

In the 1990's a fire destroyed a lot of the records I had recorded.  Recently a group of record collectors helped me regain some access to these recordings when they shared the recordings they had made of my records.

While I was devastated by what was lost in the fire the support of my fans has always supported me through the hard seasons of life and helped me maintain my creativity and consistency as a performer.

The track is a great example of the energy and beauty in the call and response style of Etaskor music. Mr. Ugabi hypnotic vocals are backed by a rapturous chorus and  a stellar psych guitar section that add flow, depth, poignancy and urgency to the sound.

At once meditative and introspective the music ebbs and flows and you have no choice but get drawn into the dialogue and all you want to do is sway and dance to the rhythmic beat and the truth it expresses.  A great example of what makes the Etsakor sound one of the great musical treasures of Nigeria.

As an added bonus to the track I have added a link to a Facebook concert Mr. Ugabi and his sons recently did.  This is the first live online performance by the artist that I know of.  Mr. Ugabi is trying to raise some money to build a home studio to preserve his work and the Etaskor sound.

If you like the music and would like to contribute here is a link to the Gofundme site we have setup.  It has some more information on what Mr.  Ugabi's musical discography and what he's like to do with the home studio.

If you can make a contribution that would be great, but we'd also appreciate if you could share the link and this blog space on your social media accounts so we can try to get other people involved with the project and his music.

gofundme.com/f/recording-studio-honorable-vincent-ugabi - you can cut and paste the link.

I hope you enjoy the music.

Posted by ubulujaja at 3:06 PM